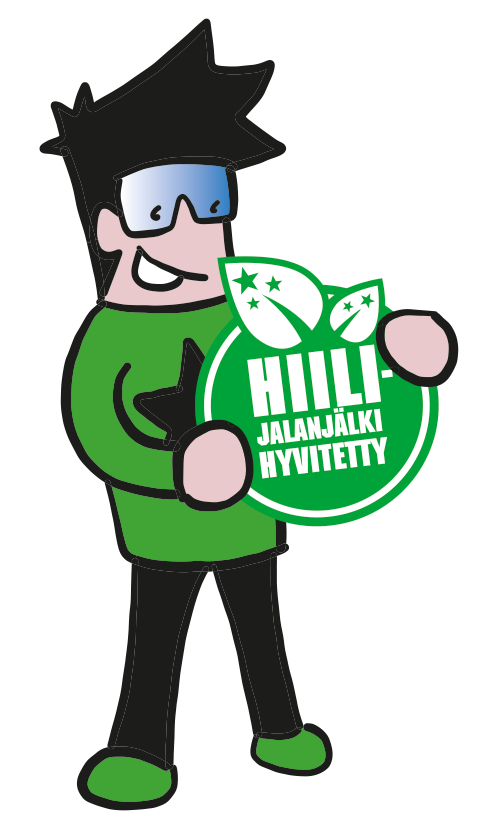 From time to time, opinions are heard that fireworks are significant polluters. The image must have been born that when rockets are fired, smoke is produced, and on the other hand, when the effects of a rocket or pot explode in the sky, smoke is also produced. Smoke and burnt gunpowder are thought to be pollution. We at Rakettitukku knew that in reality most of the smoke is condensed water vapor and the small particles generated from the burning gunpowder are quite similar to what is created, for example, when heating a wooden sauna or in traffic. An ambitious idea was born at a meeting a year ago! Could a fireworks company be carbon neutral? In our view, our company’s carbon footprint can’t be much different from other importing companies, so we decide to turn ideas into action and get to work!

We set an ambitious goal that already in the next season, together with the importer, we will be the first company whose carbon footprint has been calculated and credited, even the first in the EU. It would be great when we could also announce that by purchasing fireworks from Rakettitukku, the consumer can be happy about the carbon footprint.

Determining your carbon footprint was not quite a simple operation. In cooperation with our importer, we launched the project by searching for suitable calculation formulas, identifying data sources and studying the topic. The project also had to make alignments and delimitations, for example, where the measurement starts and where it ends. Once we thought we had determined the share for the companies, we decided to check the approach angle with an outside expert. CO2 Esto Oy from Laukaa was elected to this position.

The measurement of the carbon footprint of the Rakettitukku starts from the Chinese port of Shanghai and ends with the products being used in Finland. In other words, the logic is that everything that is imported in one year is also shot and the carbon dioxide emissions from this entity, together with the company's other activities, form an annual carbon footprint. In fact, not all imported products are sold or used in the same year, but we found that this mindset at least does not underestimate the emissions generated.

In 2022, Suomen Rakettitukku Oy's CO2 emissions was total approximately 672 tonnes. This may sound like a lot, but if it is compared, for example, to the CO2 emissions caused by one Finnish person (10.3 tonnes, Sitra), then it means the annual emissions of about 65 people. It is also important to note that the majority (over 89%) of our emissions come from foreign and domestic logistics and less than 8% from the actual use of fireworks. Our operations in these respects are therefore equivalent to any wholesaler importing and selling products from the Far East. 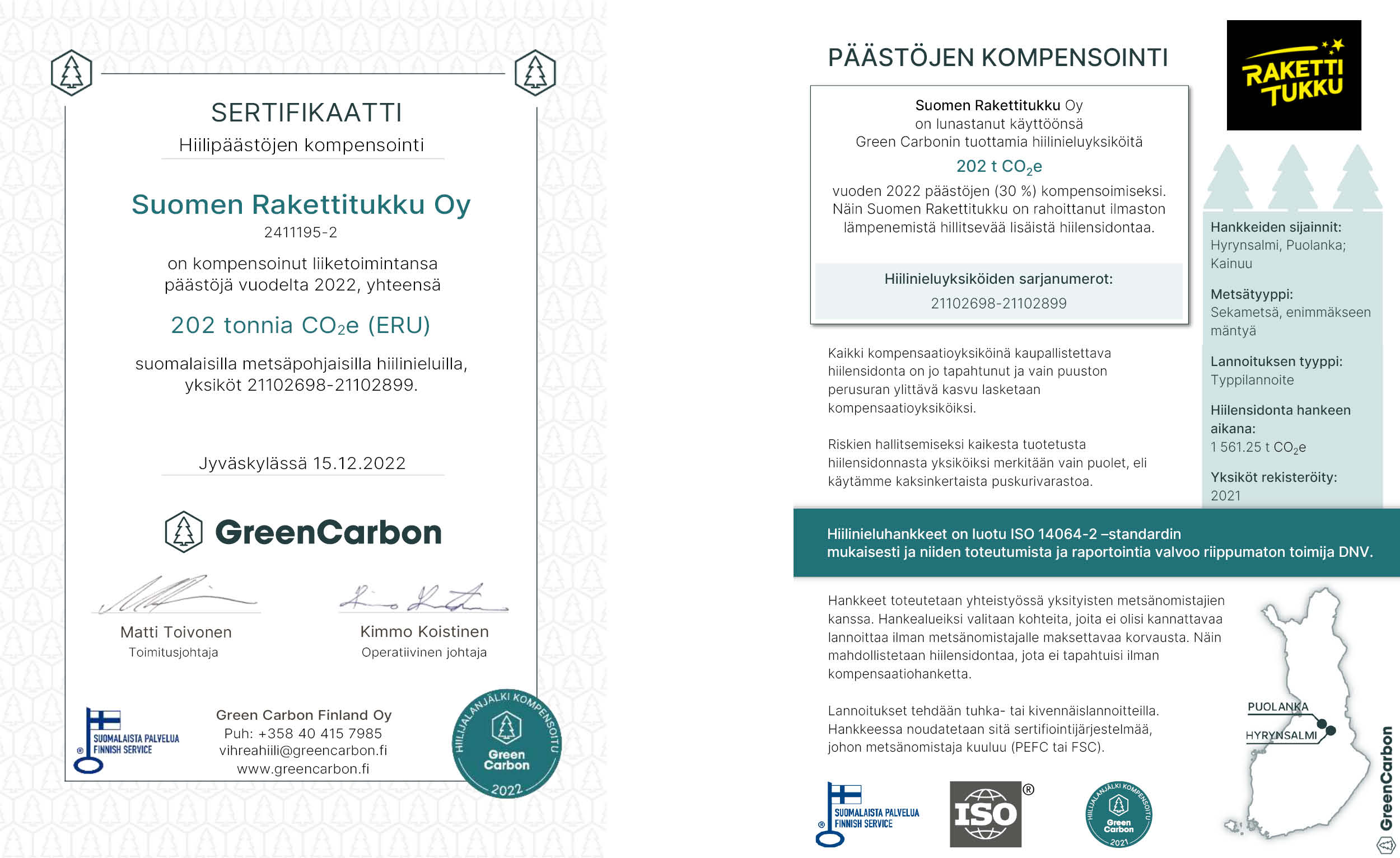 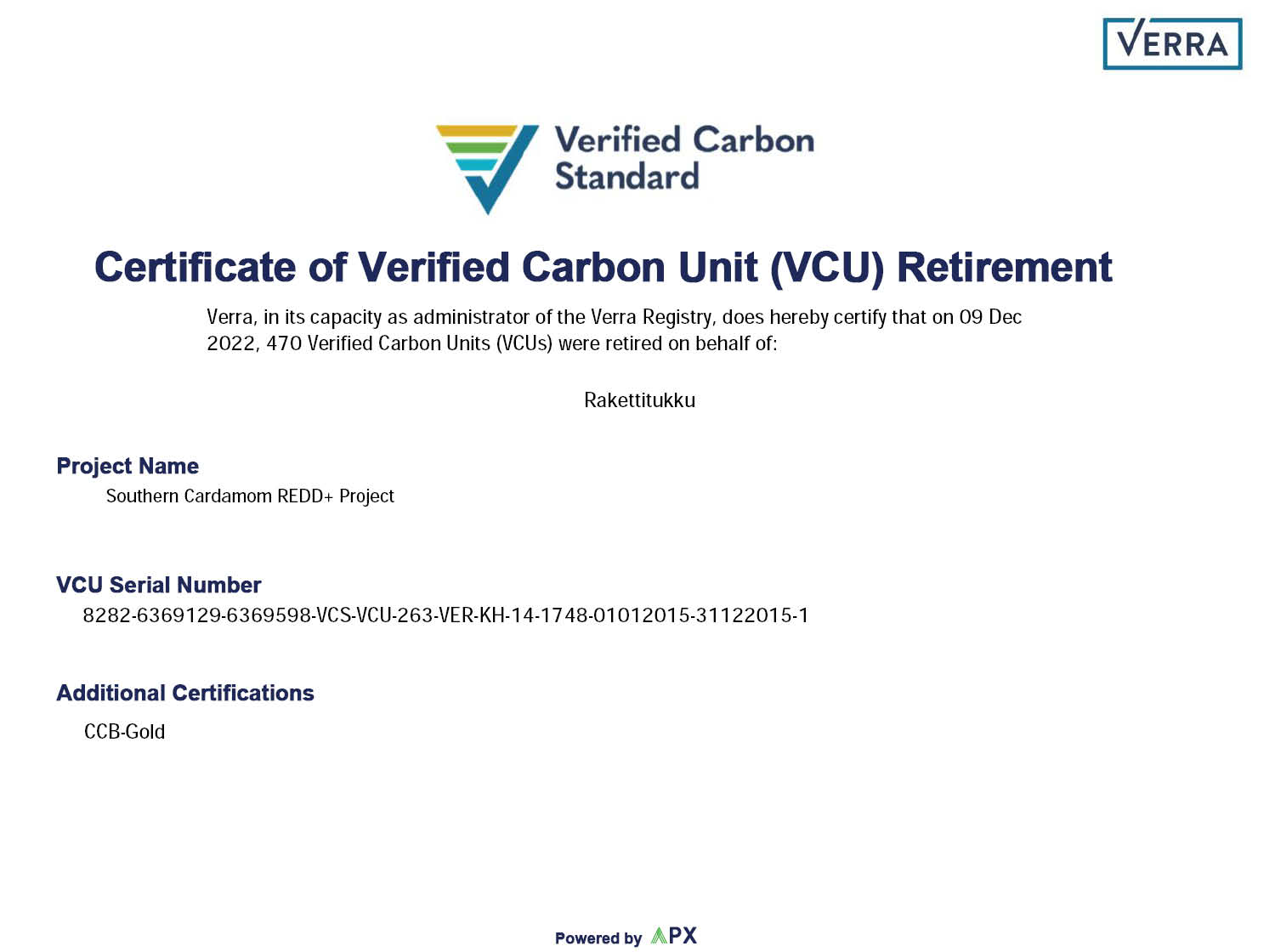 Once emissions have been determined and offset, we will still have tasks for years to come. First, there is a need to go through the supply chain and assess whether there are any changes that could be made to reduce the carbon footprint in the future.

Our journey into a carbon-neutral company has been interesting and instructive. However, we can be proud of the result. It is a pleasure to say that Rakettitukku, together with our importer Suomen Ilotulitus Oy, is one of the first fireworks companies in Europe, perhaps even the first in the world, which is carbon neutral.

So get carbon-neutral fireworks from Rakettitukku, and celebrate the new year with joy!

HOW TO SHOOT ROCKETS SAFELY